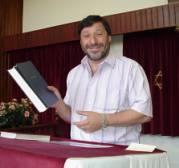 Rabbi Elf lives in North Manchester with his wife Simone. He has two daughters, Rachel and Deborah and three stepchildren, Joshua, Ilana aged and Daniel.

Rabbi Elf has two careers, from Monday to Friday he is a Maths Teacher at Bury Grammar School and on alternate weekends he is our esteemed Rabbi.  Rabbi Elf was a teacher of Mathematics in schools in Barnet and Bury and from 1984 - 1988 he was a Youth and Community Worker at Edgware and District Reform Synagogue.

Rabbi Elf served as Mazkir of RSY-Netzer for a year in the mid-1980s and was Northern Student Chaplain for RSGB from 1994 - 1998 as well as being the Rabbi of Sha'arei Shalom Synagogue. In 1998 he became the Director of Education at South West Essex and Settlement Reform Synagogue where he served until 2003 before taking up his current position as Rabbi of Southend and District Reform Synagogue (although he was leading Shabbat services for almost two years before this).

His interests include participating in interfaith dialogue and projects, playing squash, walking and (in his own words) telling bad jokes, but at least he thinks they're good.