Here are the photos from the wonderful evening's concert we had last Sunday.  We raised over £2000 for Havens Hospices (full amount will be available shortly).  There was singing from David Perry, Rosemary Apple and Maurice Caplan.  The Eastwood Chorale sang beautifully and a young man from the choir, Alex Wood also sang a solo and played 'Take 5' by Dave Brubeck on the piano.  The other choir came from SWESRS, in Newbury Park and they brought with them further donations to Havens.  Roni Rothwell and Jane Compton entertained us on the cello and piano.  To finish the evening we had the Leigh Estuary U3A Ukelele Band led by Marilyn Collins who played a selection of tunes for us all to join in with.

We mustn't forget to mention Rabbi Elf who acted as compere and thanks go to Diana Miller and all her helpers who arranged the refreshments, including many cakes that members of the shul had made and donated.  A bouquet was presented to Della Carr as she was the inspiration for the concert, as it is one of her bucket list to raise funds for Havens who are hoping to build a state of art new hospice. 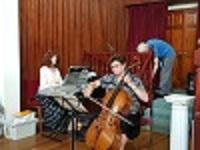 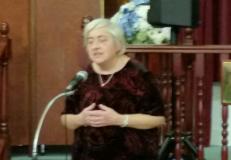 Alex Wood from the Eastwood Chorale 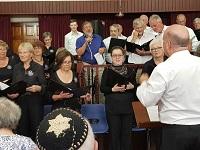